Nestled in the forest, 50km south of Paris is Fontainebleau. Widely considered one of the best bouldering destinations in the world. The forest is scattered with thousands of sandstone boulders of all shape and sizes offering over 20,000 problems at all grades.

In fact, it is composed of several rocky areas, around Fontainebleau, Milly –la-Forêt and Nemours, to name the main small cities. So you can visit a pretty extended zone, spreading in public forests like the Forêt Domaniale de Fontainebleau and the Forêt Domaniale des Trois Pignons, and the forêt de la Commanderie-Larchant in the south. The Office national des forêts, or ONF, is a public establishment in charge of a sustainable management of such public forests in France. Other boulders areas are located in privately owned woods, mainly in the western zone.

Most of this extended zone is part of the Man and Biosphere Reserve of Fontainebleau and Gâtinais since 1998, joining an international UNESCO programme in favour of a sustainable development linking local involvement, education and a scientific research. Coordinated by an association, the Reserve promotes Ecotourism as one of its main initiatives, where outdoor activities like bouldering naturally finds their place.

Created in 1999, the Parc Naturel Régional du Gâtinais covers the western part of this zone, with a headquarter “La maison du parc” located at Milly-la-Forêt. The role of such park is to promote sustainable economic development together with the protection of the natural environment. They provide information and incentives for diverse activities, including tourisme.

The sandstone boulders of Font offer a huge variety of features: slopers, crimps, roofs, high-balls, rounded mantles, dynos, aretes, slabs, compression problems and pretty much anything else you can think of. If you can’t find a problem in Font that’s your style then maybe bouldering’s not for you.

Sandstone by it’s nature is very susceptible to erosion so make sure you clean your shoes before stepping on to the rock and don’t climb on wet or even damp rock.

Visit Our Playground to find out more about looking after Font.

A bit of history

Fontainebleau Forest and its boulders have been admired for centuries by hikers and painters from the Barbizon School in the 19th century.

It is reported that rock climbing started at the end of the 1800s, as training for the mountains, with an active influence of the the Club Alpin Français section based in Paris.

Some traditional problems were named after famous climbers of the beginning of the 20th century: Prestat, Wehrlin, Maunoury, … and the famous Pierre Allain, who invented the soft rubber-soled climbing shoes.

At the same time, famous Bleausards were active alpinists and even participated in international expeditions in the Himalaya or Andes, such as Robert Paragot, Lucien Bérardini and René Ferlet.

A first guidebook from 1945 provided a map of boulders with their names and ratings.

The first circuit with painted boulders were created in 1947 by Fred Bernick in the Cuvier Rempart area, followed by routes at Les Gorges d’Apremont painted by Pierre Mercier in 1952.

Waves of strong climbers continued increasing the level of difficulties, from 7A to 8A between the 1950s and 1980s (Robert Paragot, Michel Libert, Thierry Bienvenu, Jerome Jean-Charles, Pierre Richard, Jean-Pierre Bouvier, Marc Le Menestrel… to name only o few).

Modern bouldering really burst in the 1990s, with the adoption of crashpads securing falls and allowing new explorations. Jô Montchaussé, a passionnate climber native from the Forest, has been a early adopter of the pads invented in the USA, and created his own Triple Pad still sold in Barbizon anda round.

You are spoilt for choice with number of different bouldering areas in Font, all offering slightly different experiences. Most guidebooks will highlight which areas are best in the sun, after rain, with children, good for high-balling etc. They all tend to have good and often sandy landings and walk-ins to the boulders are never usually more than 20 mins with many literally within sight of the car park.

During holidays and at the weekends the more popular areas like Bas Cuvier and Roche aux Sabots can be busy so if you’re there for a week or more it’s best to leave these areas to mid-week. 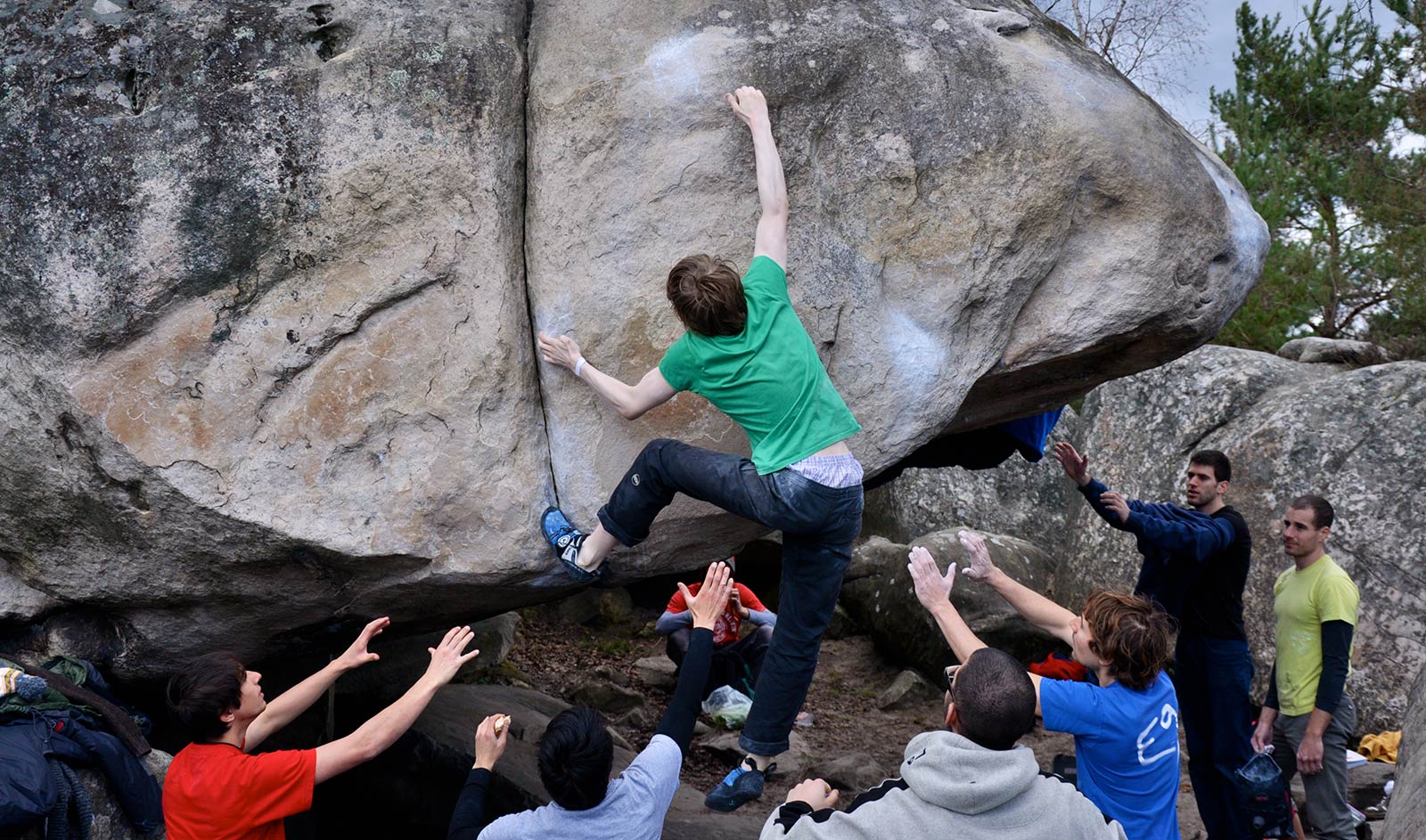 Grades are just a guide so try not to get too hung up on them. Some think that grades in Font are stiff but once you’re into the style and movement of the climbing and get a problem in good conditions it should hopefully all come together. If not, just remember a certain Mr Ondra fell off La Marie Rose in Cuvier graded f6A!

This is still a highly debated topic without a definitive answer although outside of France the general consensus is a very clear: don’t use pof, use chalk. In short both chalk and pof are damaging the boulders physically and visuallyso it is on us as climbers to do our best to preserve the rock for future generations.

With chalk only use a very small amounts, from a chalk ball, applied to your hands, never directly to the rock. Make sure to brush off excess chalk when you leave but don’t over brush repeatedly as this can damage and erode the rock too. More information on how we can all help preserve Fontainebleau can be found here: https://respectonsbleau.wordpress.com/appeal-english/.

Pof is dried pine tree resin that is wrapped in a cloth and then used to smack the holds which leaves a sticky residue on the rock therefore making the rock grippier. The problem with it is that the transferred resin hardens, builds up and becomes glassy meaning the only real solution is to add more pof. A fair number of French climbers (particularly older ones) still use pof in Font and its use is still advocated by a number of French climbing websites and organisations so I’m sure this debate will carry on for some time.

A home away from home

Where to find it

Pointing you in the right direction

If you have any changes or additions that you think would be good to include, just let me know. Thanks.